To truly be able to understand how to use a camera, I started to learn the different parts of a camera, and what they do.

There are a few key elements that are needed to be understood to be able to use the manual setting of a camera, I researched a little and these are some of the important elements that all fit in with each other to create the perfect image.

Exposure is the amount of light that hits the camera sensor, this can be adjusted using the aperture controls, to do this you will look through your cameras viewfinder, and find the light meter, it usually has zero in the middle to indicate the exposure is just right, minus zero means the is insufficient light and plus zero means there is too much light.  There are two parts to take note of when looking at the exposure these are;

Available light when taking the photo should be something that should be accounted for when adjusting the aperture, if there is too much or too little light, you would change the aperture, ISO and the shutter speed accordingly.

The aperture is an opening within the lens, its diameter is adjustable which controls the amount of light that gets through to the camera sensor, matching this with the right ISO and shutter speed will allow you to get the correct exposure.

F stops is what aperture is measured in, it tends to run in a f/1.2, f/1.4, f/1.8, f/2, f/2.4, f/2.8, f/4 format, the bigger the number the narrower the aperture. The narrower the aperture the less light it can let in, and the wider the aperture the more light it can let in. Shutter speed needs be slowed down to counter the fact there is less light entering the lens therefore more time is needed for the lens to capture the image. So to recap f/1.2 would require a fast shutter speed while f/4 would require a much slower shutter speed.

Wider apertures create a shallow depth of field by blurring out a lot of the background, this would be useful when taking a photo of something small. Meanwhile the opposite occurs when there is a narrow aperture as it creates a deep depth of field which is better for taking photos of things like landscapes.

ISO stands for image sensor, and basically it means how sensitive the camera is to available light, the lower the number, the less sensitive it is, the higher the number, the higher the sensitivity is. The advantages of a high ISO is that it can compete images in low-light conditions without a flash, but this come with noise on the images. Most cameras have a base ISO which is the optimised iso level for that camera, it is usually around 200. The numbers double as they go up, but they also double in sensitivity, so they start at 200 and carry on to 400,800,1600,3200,6400. This also mean it takes less time to take the image, i found this great scale;

Therefore a focus that is moving fast can be shot with a high ISO, whereas on that is still can be shot as a low one. 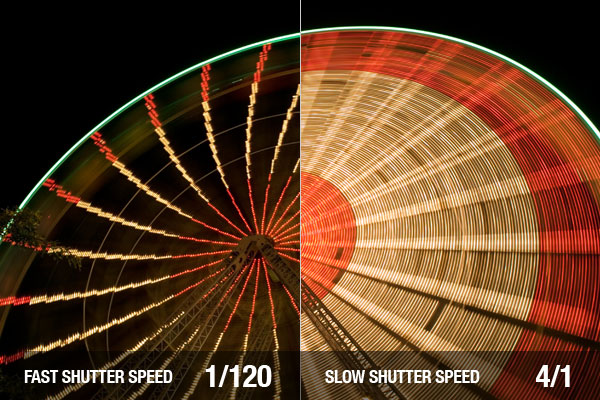 A shutter can block out light from the camera sensor, this can be controlled to create different effects within an image, for example if the shutter speed is slow, the longer the cameras sensor is open to light, therefore creating blurred images meanwhile a shutter speed that is fast will catch an image in a quick snapshot almost making the focus look frozen. There are a few different methods that take advantage of shutter speed.

Having spoken about the most important elements to sum up everything I have just discussed there is the exposure triangle which is something that should be considered when taking a photo.