There were quite a few puns related to the characters being pigs;

– When birds fly (The birds in the movie don’t fly)

– What the pluck (Instead of swearing)

There was also a very respected character in the movie called Mighty Eagle. The one that all the characters look up to for wisdom and help. Having a Special frog character who could offer help might be a good way to encourage the use of the help section.

Celebrity singer Shakira made an appearance as an animated character in this movie. Perhaps in the future celebrities could have their own special frog created and hold a competition/conversation with the students around the world provided it was on topic and relevant.

History of the animals in the movie were made reference to and this could be an interesting point to touch upon in some form of theory.

The story has morals for the viewers to listen to, the main characters parents say to the child that they can do anything they want, and the story follows the hero that despite being told by others that she cannot be a member of the police, she successfully becomes part of the force. BE INSPIRATIONAL.

The movie makes lots of references to the real world. The heroine moves to the ‘big city’ that looks a lot like New York City.

The movie includes puns too;

– “I’ve got to address the elephant in the room” in an awkward situation, then turns to an elephant cop and says happy birthday.

This movie makes a point of how bullying can have a huge impact on someones life. This site should do it’s absolute best to prevent this.

They visited real life places in the movie like the natural history museum. It gave me the idea that certain customisation items for the frogs can become available if a user is tracked going to a certain location. Just like the Snapchat place filters.

The scene at the beginning of the film is referenced throughout the rest of the movie. The introduction to the site could include a short video that has references made to it throughout the experience.

There was clever usage of fonts within this kids animation. Fonts and the use of colour can massively increase the kids appeal of a movie and in turn a website.

The soundtrack was great. There were a group of animals that told the story of Rango, and made appearances throughout the movie to give updates and play songs. The use of a bot on the website that can act as an assistant like Google Assistant or Apple’s  Siri to help with the students learning could bve advantagous. They could pop up and offer to play a quick tune from that country when they check out a new country.

This movie is really clever, it shows the relationships between aniumals of the same breed and also animals that have no connection at all. More interestingly it pulls out the meaning of how if the animals work together, they can become much stronger.

This movie was the most relevant to my project because it’s main characters were frogs. It had some really important things worth noting. The landing page could adopt the storybook layout shown in the movie when they first describe the traditional frog and the prince story. 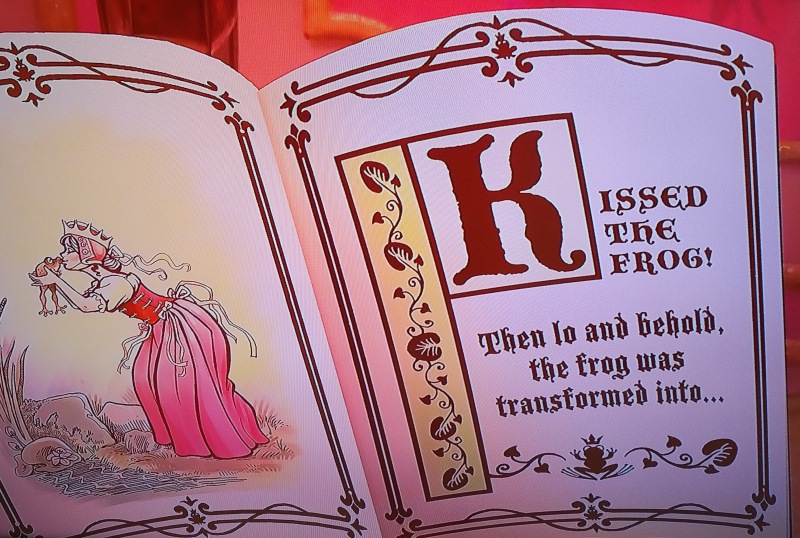 A pun used: Hop to it

Music makes a large part of this film, and help splits it up. It brings up some interesting points, the site can include music as the user browses it. It can also start cultural challenges, a month long projects that the kids can get involved in through school. A great example of this could be music, lyrics could be posted as part of the challenge, and the users could go away and interperet the lyrics how they wanted and post their resultsd as part of the challenge. This way users could browse the multiple recordings of the same song but then see how culture and tradition influences the sound of the song.

This is a great movie that portrays the different emotions of the main character. Joy, anger, sadness, nervous and witty all play their own part as the characters and this may be something I should consider for my project..

Including other animals other than frogs that are not animals that the users play as but instead just see throughout the experience can have differenent emotions that can be used to encouraged to manipulate the user into comepleting certain tasks.

Frozen was set in a magical kingdom and the film celebrated relationships. It further included ideologies of royalty and class within the film. This was interesting but not something I want to deliver in my website as I believe all the students should feel equal.

The movie makes a point of how important friends and family are in this movie, and how integral to relationships honesty is.

Frozen had lots of songs throughout the film and it is important to point out that this movie was very much themed around winter meaning it became a brilliant film for selling accessories for around christmas time.

The good dinosaur that portrays basic human emotions throughout the movie.

It shows the magic of learning about new enviroments with a friend.

It shows how with guidance/protection of a external being you can become stronger, I think that this means that the frog within the game should not be the character the user chooses to play as, rather, to befriend for help and ressuarnce as he explores the world with his friend.

His father says to him as a young dinosaur in the movie that if he ever gets lost, just follow the river and you will find your way home. The same should be said for the website, should the user get lost, they should click on their pond to go back to their homepage.

The movie is clever as it shows how the characters transition from young and fearful to more confident and developed beings.

One thought on “Notes from Childrens Movies”